Open Door Mission is a faith and evidence-based recovery and rehabilitation program and facility dedicated to transforming the lives of the most severely addicted, destitute, homeless and disabled men in our community. 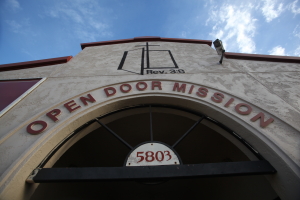 “ I know your works. See, I have set before you an open door and no one can shut it: for you have kept my word and have not denied my name.” ~ Rev 3:8

THE OPEN DOOR MISSION’S MICHAEL E. DEBAKEY M.D. HUMANITARIAN AWARD — This award was created by the Open Door Mission Executive Committee in 2006 to recognize a person or organization that has made a great humanitarian contribution. The Open Door Mission Humanitarian Award is named for Dr. Michael E. DeBakey, the world’s most renowned heart surgeon. Dr. DeBakey was also known as an innovator, researcher, and educator.

The Mission is 100% donor-funded