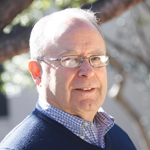 Tommy joined the Mission in 2013, coming from the position of Executive Director at Main Street Ministries, a local outreach ministry of the First Presbyterian Church of Houston. Tommy surrendered to the call to men’s ministry and prison ministry in 1993 following a Walk to Emmaus spiritual retreat. He served as a lay volunteer in the Cursillo Community of ministries until 2009 when he joined FPC on a full-time basis.

Following his college graduation, Tommy served in the United States Army and US Army Reserves for six years as an instructor followed by a business career spent in maritime logistics in the energy sector where he was the Executive Vice President of Statia Terminals, Inc. Statia was an owner/operator of oil storage and transshipment terminals located on the Dutch Caribbean island of St. Eustatius and Nova Scotia, Canada. Between the years 1983 and 2002, Statia went from private ownership, through an LBO, an IPO, and eventually was sold and is now part of the NuStar Energy (formerly Valero) portfolio of assets. Tommy retired from Statia in 2002.

Tommy has been in substance abuse recovery since 1987 and understands the issues that accompany this disease. His joy comes from hearing a man come to Open Door and say that he has been in rehabs before, but never before one that majors in a relationship with God.

“God has given me a clear vision to see the Open Door Mission become a place where men and their families are introduced to Jesus in positive ways. I can’t make anyone eat the Bread of Life or drink the Holy Water, but I can make the introduction. It’s then up to the individual to develop his or her own relationship with Him. I believe this is what we strive to accomplish at the Mission. A relationship with Jesus is the way to maintain a life of sobriety. Our focus must always be on Him. We further believe that every child, boy, and girl, needs a positive male influence in his or her life. It is our job to teach this and for the fathers to learn this and want it for his children.” Quoted from Tommy’s message at the Open Door Mission 2017 Gala